Two cards on the New Moon

My grand daughters spent the afternoon & stayed overnight Sat. After a day full of sorting & clearing, we did some collage.
I made my New Moon cards in Capricorn Cards.
They LOVE cutting & pasting with Grammie - it was a nice way to end the day. We used a calendar I brought back from Hawaii a few years ago as the 'base' photos - Alyssa chose an orchid, Kakay some Red hot pokers.

The first is Soul Dan 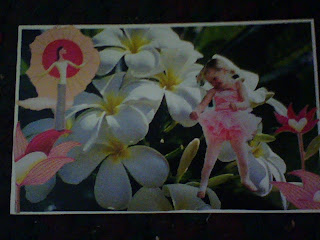 ce. The essence definition for Plumaria is "Brings awareness of family roots. Restores spiritual integrity for native peoples."
When I visited the Big Island, Plumaria was an essence I was drawn to make, & did so early the last morning. I felt blessed that a native man (one of the grounds workers) helped me get a sprig of flowers, & brought me another - Pikake - which he was very excited to show me! I had looked the definition up on the hotel computer before going out, & felt that 'spiritual integrity' was really 'tapped' with his assistance.
The little girl REALLY reminds us of my Kakay 'rocking out!' . . . there's a sense of fairies, & the dignity of the woman on the left.
"I'm the one who is excited to BE HERE, who hears the music of the spheres & dances my own dance! I am the one who sees the essence behind the symbols, the turn of the seasons. I am the one who transcends the wheel of life, & finds the beauty wherever I AM!

The second card, Petroglyph, draws on images from 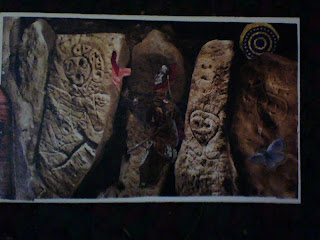 Peru , with a shaman in the center, & a blue butterfly on the Right. "I am the one who has been present from the dawn of time. I am the one who provides light to draw on the stones of your soul! I am the one who shares the secrets, & tells the stories. I am the one who remembers. Drugma Cho Dron Wong Mo - the dragon depository of the Dharma! I bring forth the heart of all that is."
I was given the name as I studied a Buddhist version of Reiki; the week before, a psychic had tagged me 'Wisdom Keeper!' I puzzled over the Tibetan name - then made the connection - 'dharma,' wisdom teachings, 'depository' - something to keep them in - ah ha! Dragon Mother, Wisdom keeper!!

that is so very cool... i love the images and the meanings! hawaii is a very magical place indeed - mama pele is one of the goddesses i feel closest to... when my daughter was in labor, i prayed to mama pele to end it quickly and happily... at that point my daughter started complaining... i feel so HOT... i feel like a volcano!! :)

These are so beautiful, Dia! I love collage, but always feel like I'm making a big mess of it. I really need to get over that and just dig in!

Oh, Annie, that's a fun story! You really got things 'cooking' for your daughter!

Fey, I always make a mess!! I've been working on 'cleaning up right away' & it's fun to make a mess with the grandkids! Now, If I could clean as I go in the rest of the house, . . .