Over the last couple of days I did more of the details, raised the hairline a bit, then shifted that a bit more, added Prayer Flags & Tsagigala/ Tsagagal - the Columbia River painted petroglyph we know as 'She Who Watches.'

My grandmother Mary grew up not far from this place on the Washington side of the Columbia, & spoke Chinook Jargon (the trade language, with its mix of Columbia dialects, French, English) ... so I was thinking of waiting and using Tsagigala in a future picture of Mary (whom I never knew!)

But after chalking her in, she seemed to want to stay!


"There was this village on the Washington side of the Columbia Gorge. And this was long ago when people were not yet real people, and that is when we could talk to the animals.

"And so Coyote — the Trickster — came down the river to the village and asked the people if they were living well. And they said "Yes, we are, but you need to talk to our chief, Tsagaglal. She lives up in the hill."

"So Coyote pranced up the hill and asked Tsagaglal if she was a good chief or one of those evildoers. She said, "No, my people live well. I watch to see my people have good salmon, venison, berries, roots. I watch to see they have good shelter. I watch that we live in peace. I watch so good things will happen.
Why do you ask?"

And Coyote said, "Changes are going to happen. How will you watch over your people?"  And so she didn't know. 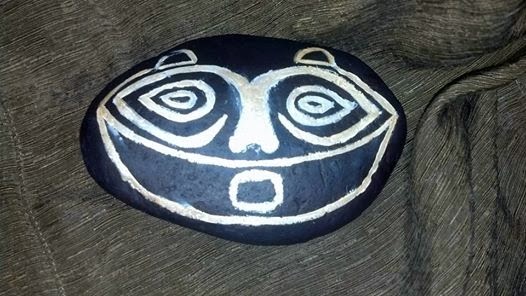 "And it was at that time that Coyote changed her into a rock to watch her people forever."

So beautiful .... I really like her. And also the painted stone. Love that painted petroglyph, I'd never heard of it ...

Thank you!!
I love your work, so that means a lot! Glad you stopped by ...